by Alan Jenkins and Melinda Young 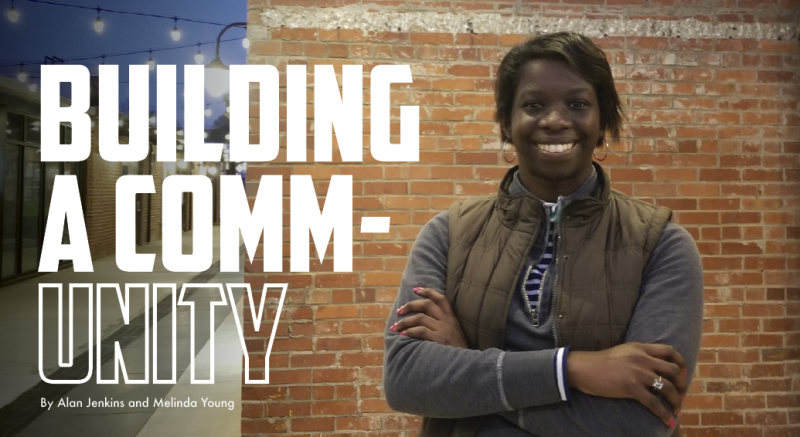 At one time, Lauren Rogers planned to become a speech pathologist and work in the corporate arena.

“I never would have considered construction,” she said.

Hard to find
Plumbers. Electricians. Carpenters. They’re all essential to a hospital system that is constantly growing. They’re also hard to find in today’s economy.

“Right now, hiring skilled labor is a next-to-impossible task,” said Jason Head, construction-renovation manager at Spartanburg Regional. “It’s harder and harder to find people who are trained and know how to do the work on day one.”

So, Spartanburg Regional leaders decided to train their own.

In 2016, the health system teamed with Spartanburg Community College and the National Center for Construction Education and Research, a nonprofit that provides global training and certification, to provide construction skills training to area residents.

Community members sign up for classes in construction and specialty training in carpentry, plumbing, and electrical construction. Most of the students came from the Northside neighborhood in Spartanburg, an area experiencing a renaissance as community leaders work together to alleviate high unemployment and poverty in that area.

While there are fees associated with the class, scholarships provided by community organizations such as the Northside Development Group have covered the costs. The nonprofit SC Works pays the trainees’ work during the 12- to 16-week internships.

The program has many partners – Spartanburg Regional, the Northside Development Group, the City of Spartanburg, the Upstate Workforce Board and OneSpartanburg.

The training has worked. After passing individual certification tests, students are finding jobs. Five graduates were hired by contractors that work with Spartanburg Regional. Others are being hired soon after they earn their certifications.
The certifications qualify workers for construction jobs anywhere in the U.S., thanks to the involvement of the community college and the National Center for Construction Education and Research. 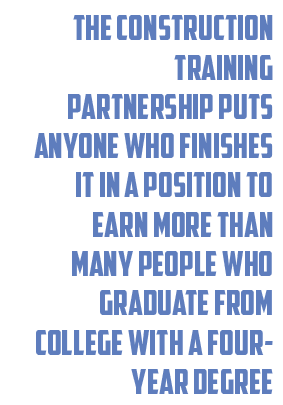 “‘Trade’ was a bad word. You think of it as lowly, but trades are needed.”

IB Industries is one of only two minority-owned construction-related businesses in the area.

Rogers heard about the classes through the Northside Initiative Program. She enrolled in March 2018.

A win-win
The construction training partnership puts anyone who finishes it in a position to earn more than many people who graduate from college with a four-year degree, Head said.

“I personally know of young men and women who are earning $60,000 a year doing construction work,” Head said. “It’s a win-win for us and a win-win for students.”

The cost of providing the training is minimal. Most of the students receive scholarships through the Northside Development Group, and Head’s staff trainers do not take a salary.

A better life
Before the Construction Training Program, Stephen Hill was unemployed – and homeless.

“When I found out about this Northside program, it was near me,” Hill said. “It was in Spartanburg, and all I needed was the transportation to get to class.”

Head picked Hill up to go to class. He taught Hill about carpentry.

“After class and after the whole program was over, I started earning money,” Hill said. “I went out and saved up my money and found me an apartment.”

Creating jobs
Renee Romberger served as a driving force behind the program’s creation. A retired vice president of community health policy and strategy for Spartanburg Regional, Romberger was recently awarded South Carolina’s highest civilian award, the Order of the Palmetto.

With support from Romberger and Spartanburg Regional’s leadership, Head’s hard work made the program a reality.

The Construction Training Program is a shining example of the many partnerships that are transforming the Northside, according to Spartanburg Medical Center President Phil Feisal. And while Spartanburg Regional has been able to fill its own needs with the program, graduates can take their certification and get a job “within our community or beyond.”

The construction skills training course is now available beyond the Northside.

Jessica Pickens and Darrel Thomas contributed to this report.

Go back | Show other stories | Send this page to a friend

BusinessView, created by the Spartanburg Area Chamber of Commerce in collaboration with community partners, is your informative resource guide to learning about the economic vitality and lifestyle environment of Spartanburg County. Readers of BusinessView will receive important information about Spartanburg’s thriving community, including economic indicators, business profiles, and community initiatives, and educate themselves through legislative updates, advice from business owners, and more. SEE THE FULL ISSUE HERE or grab a printed copy at the Spartanburg Area Chamber of Commerce.

What Our Members are Saying

“In Spartanburg, I am empowered to make significant contributions”
Jenni Russell
R&D Specialist
Contec
“I love having a growing downtown at my backdoor”
Jarrell NeSmith
MD
Spartanburg Regional Healthcare System